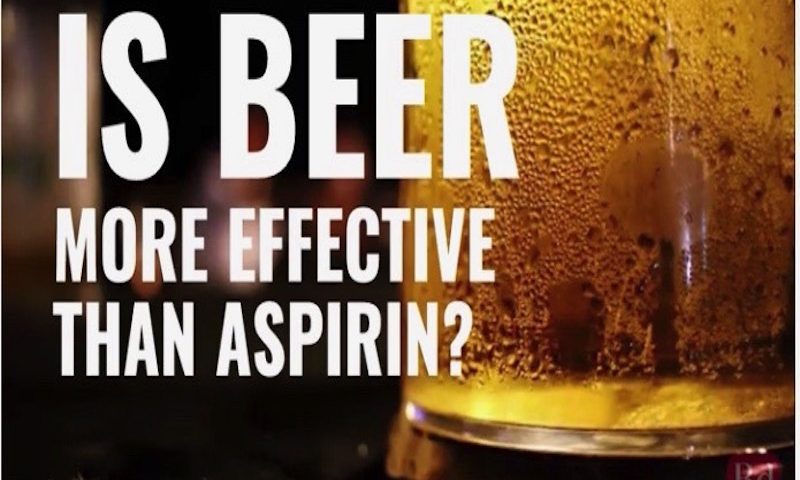 No, drinking isn’t a replacement for over the counter pain relievers.

Aches, pains, and sore body parts come with exercise, old age, and the wear and tear of everyday life. Sometimes, it helps to take an over the counter pain reliever like aspirin or ibuprofen. A question researchers posed is whether or not alcohol has an impact on pain relief. Here’s what they found—and what the catch is, according to research.

Here’s what the study found

A study from the Journal of Pain links beer to pain relief. For their research, the scientists from London’s Greenwich University conducted a total of 18 experiments in which 404 participants were given either an alcoholic or non-alcoholic beverage. Next, the team administered 13 pain-threshold tests as well as 9 pain intensity ratings. What they found was that alcohol reduces pain by about 1.2 points. Patients had to drink quite a bit of alcohol to arrive at that small decrease, according to Didier Demesmin, MD, the Director of Pain Medicine at Saint Peter’s University Hospital not involved with the study. Three to four beers would get the average person to the legal limit with only modest pain relief. So it’s not one of the things that chiropractors do to get rid of their own pain.

Although the effect is clear, it’s undetermined if the pain relief comes from an effect on pain receptors or just a lowering of anxiety, which could lower pain perception. “It is not clear from the study whether the alcohol has a purely analgesic effect, which is to say that it blocks pain receptors in the body so that a person does not feel pain, or is it that there is euphoria experienced as a result of the alcohol and so this affects the perception of pain,” Dr. Demesmin says. So although study participants reported a decrease in pain, it’s unclear if how or why this happens. We do know that there’s research behind these other anti-inflammatory foods that you can eat to reduce pain.

Regardless of exactly how beer works to ease pain, the researchers did note that people who suffer from chronic pain tend to drink more due to the pain-dulling effect. However, just because something like alcohol makes you feel better temporarily doesn’t make it a good choice for pain relief. Plus, there’s a very small range between the mild effects of alcohol and intoxication, according to Mark Boswell, MD, a professor of Anesthesiology and Pain Medicine in The University of Toledo’s College of Medicine and Life Sciences. Regular pain medications are more effective and safe with proper use, and they don’t offer the same risks as drinking. And if you’re taking any of these other medications, you shouldn’t be mixing with alcohol, either.

Note that experts don’t disagree with this research on beer and pain relief, but they warn that these studies are not advertising drinking as a healthy alternative. In fact, Jan Campbell, MD, the Director of the Addiction Treatment Center at the University of Kansas Health System, says there are no circumstances in which alcohol is a recommendation for pain control. The risks of relying on drinking for pain relief include chronic health issues such as liver and cardiovascular damage as well as addiction, all of which outweigh any potential relief. “When one attempts to self-medicate with alcohol for chronic pain issues, then problems with alcohol tolerance and even alcohol dependency may ensue,” Nesochi Okeke-Igbokwe, MD, a health expert adds.

Avoid all of these risks by consulting with your doctor for the best way to treat your pain. “Some of these are over the counter, some require a prescription, and some are techniques we can all learn,” Sean Mackey, MD, PhD, the Chief of the Division of Pain Medicine at Stanford says. Finding the root cause of your pain is key, and is one of the things pain doctors won’t tell you.