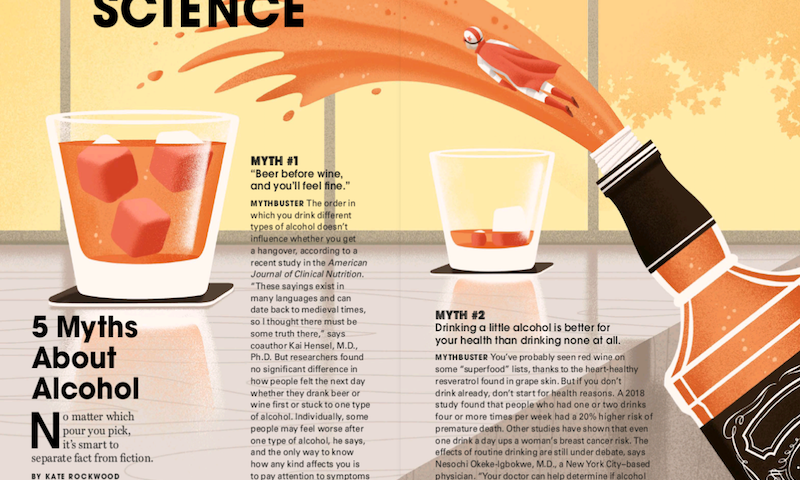 No matter which pour you pick, it’s smart to separate fact from fiction.

MYTH #1 “Beer before wine, and you’ll feel fine.”
MYTHBUSTER The order in which you drink different types of alcohol doesn’t influence whether you get a hangover, according to a recent study in the American Journal of Clinical Nutrition. “These sayings exist in many languages and can date back to medieval times, so I thought there must be some truth there,” says coauthor Kai Hensel, M.D., Ph.D. But researchers found no significant difference in how people felt the next day whether they drank beer or wine first or stuck to one type of alcohol. Individually, some people may feel worse after one type of alcohol, he says, and the only way to know how any kind affects you is to pay attention to symptoms the next morning.

MYTH #2 Drinking a little alcohol is better for your health than drinking none at all.
MYTHBUSTER You’ve probably seen red wine on some “superfood” lists, thanks to the heart-healthy resveratrol found in grape skin. But if you don’t drink already, don’t start for health reasons. A 2018 study found that people who had one or two drinks four or more times per week had a 20% higher risk of premature death. Other studies have shown that even one drink a day ups a woman’s breast cancer risk. The effects of routine drinking are still under debate, says Nesochi Okeke-Igbokwe, M.D., a New York City–based physician. “Your doctor can help determine if alcohol intake may compromise your health,” she says.

MYTH #3 If your last drink was an hour ago, you’re good to drive.
MYTHBUSTER “How quickly people metabolize alcohol varies,” says Scott Walters, Ph.D., of the University of North Texas Health Science Center. Women tend to clear drinks out of their systems more slowly than men do, but everything from meds to menstrual cycles factors in (the week before your period, your blood alcohol level may stay elevated longer). And when you’re impaired, you may not know you’re impaired, says Laura Veach, Ph.D., of Wake Forest Baptist Medical Center. “No amount of coffee can speed the process,” she adds—it just makes you “a more awake drunk person.” Wait at least an hour per drink after the last one (so if you had three rosés total, wait at least three hours). Or, even better: Call a Lyft.

MYTH #4 A little “hair of the dog” works as a hangover cure.
MYTHBUSTER More than 10% of social drinkers have tried having more alcohol to relieve a hangover, according to a study by researchers at Utrecht University. But more alcohol, even the next day, only delays those pesky hangover symptoms—it doesn’t lessen them, says Walters. If anything, the headache, nausea, and fatigue may hit harder or last longer than they would have otherwise. What actually helps, he says, is staying hydrated, as even mild dehydration can magnify hangover symptoms.

MYTH #5 If you’re not an alcoholic, you don’t have a problem.
MYTHBUSTER It’s not all-or-nothing.
When the National Institute on Alcohol Abuse and Alcoholism, a federal agency for alcohol research, surveyed tens of thousands of Americans between 2002 and 2013, it found that alcohol use, highrisk drinking, and alcohol use disorder were all on the rise. Alcohol use disorder includes some of the signs we tend to think of as alcoholism, like wanting to cut back on drinking but not being able to—and it jumped 84% among women during the 11-year period. Even if you’re not blacking out and you don’t crave alcohol, says Veach, it’s worth pausing occasionally to consider both why you’re drinking and how you feel about it afterward. If drinking any amount leaves you feeling bad or is impeding any part of your life, it may be time to reexamine your habits.