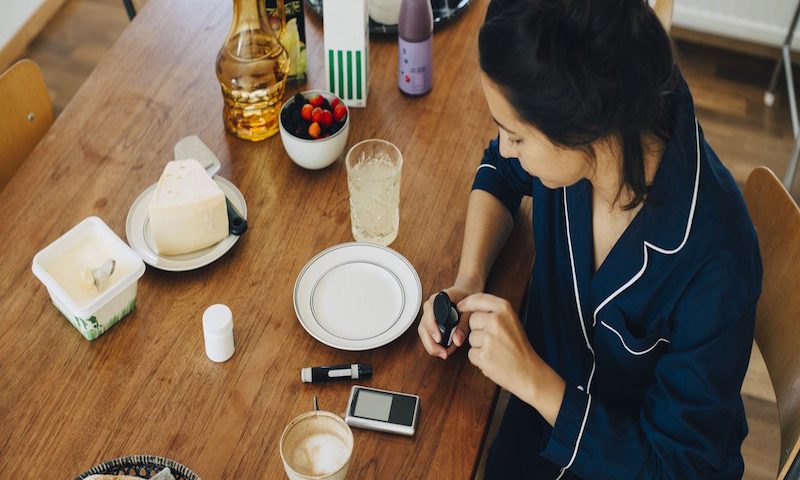 Diabulimia Is the Lesser-Known Eating Disorder That Affects Diabetics

It’s a lesser-known eating disorder, but that doesn’t mean it’s not incredibly dangerous. Here’s what diabulimia is and who it affects.T

Growing up as a gymnast and cheerleader, Sofi, 23, felt pressure to be thin from a young age. The fact that she had type 1 diabetes, an autoimmune disease that causes high blood sugar, forced her to think about food even more. Because of her diabetes, Sofi took insulin, a hormone that lowers the blood sugar of diabetics. Since she’d gained weight after starting insulin, she realized she could skip it to lose weight, in addition to restricting her food intake. During her senior year of high school, she was diagnosed with diabulimia, an eating disorder in which diabetics restrict insulin intake for weight loss purposes.

Melainie Rogers, a certified eating disorder registered dietician and the founder of Balance Eating Disorder Treatment Center in New York City, says that some diabulimics stop taking insulin altogether, and others take less than their doctors prescribe. The Diagnostic and Statistical Manual, which classifies mental health disorders, considers it a type of bulimia, since insulin restriction can be a form of “purging.”

Many people with diabulimia also have other eating disorder behaviors, like binging, purging, food restriction, and overexercising, according to Jill Lampert, a St. Paul-based registered dietician, adjunct professor in the department of food science and nutrition at the University of Minnesota, and chief strategy officer of the eating disorder treatment center the Emily Program. Asha Brown, 34, a diabulimia survivor and founder and executive director of We Are Diabetes, says all 300 of the diabulimics she’s worked with had symptoms beyond insulin restriction. Diabulimia has been documented since the 1980s, Rogers says, but most people still haven’t heard of it. Fortunately, that’s changing, albeit slowly.

Diabulimia: More common than you think

When you think about eating disorders, you may think of anorexia, bulimia, or perhaps binge-eating disorder. But among diabetics, diabulimia is shockingly common. A 2008 study in Diabetes Care found that 30 percent of diabetic women had restricted their insulin, and another study in the same journal found that 8.8 percent did so frequently. In addition, adolescent girls with type 1 diabetes are 2.4 times more likely than the rest of the population to have eating disorders, according to a study in the British Medical Journal.

Diabetics may be more prone to disordered eating because diabetes allows for weight loss via insulin restriction and also requires dietary caution, which can create anxiety around weight. “All the information out there kind of dooms you and tells you that your ability to control your weight and live in a healthy size is impossible,” Brown says. “For an impressionable young mind, that’s very difficult.”

Why it’s such a dangerous disease

Most people naturally produce insulin, which allows cells to take in glucose and turn it into energy, explains NYC-based physician Nesochi Okeke-Igbokwe. But type 1 diabetics produce little or no insulin; that’s why they need to inject synthetic insulin into their blood, usually several times a day.

If someone doesn’t get enough insulin, glucose piles up in their blood, which can damage the kidneys and retinas, Okeke-Igbokwe says. Excess blood glucose can lead to a potentially fatal condition called diabetic ketoacidosis, where acids called ketones build up in the blood, causing severe thirst, shortness of breath, abdominal pain, confusion, and other serious symptoms. Olivia, 46, required multiple hospital visits due to diabetic ketoacidosis from her diabulimia, and 45 laser surgeries on both eyes.

Diabulimia usually goes undiagnosed, as few doctors are trained in detecting eating disorders. Fewer still would know this is a behavior that can occur with clients who are insulin dependent.

When Sofi restricted her insulin during college, she would sleep for up to 20 hours at a time, frequently missing classes due to exhaustion. As a cheerleader, her fingers broke repeatedly because her body wasn’t strong enough to handle the activity. She also experienced nausea, blurry vision, muscle aches, and poor concentration. “That feeling is the worst in the world,” she says, “and isn’t worth being thin.”

Despite the severe effects diabulimia can have on the body, many people with it forego treatment because they don’t realize they have an eating disorder. “Unfortunately, diabulimia usually goes undiagnosed, as few doctors are trained in detecting eating disorders, and fewer still would know that this is a behavior that can occur with their clients who are insulin dependent,” Rogers says.

Olivia went undiagnosed for 14 years, even as her disorder landed her in the hospital. “I went to university at 18 while wearing clothes for kids aged 9-10, as I was tiny,” she recalls. “At the time, I didn’t see myself as thin. So, no treatment then.”

Like other eating disorders, diabulimia requires both physical and mental health treatment. In addition to working with a doctor to stabilize blood sugar levels, diabulimics should seek therapy to learn healthier ways to deal with the anxiety or trauma causing the food and weight fixation, Rogers explains. “People seem to think if you ate the right way and took the right insulin, then the problem is solved,” Olivia says. “However, for the person with diabulimia, it can feel impossible to do that.”

Depending on how intensive the treatment needs to be, someone with diabulimia might meet regularly with a therapist, nutritionist, and doctor, attend an outpatient treatment program with supervised meals and group therapy, or live full-time in a residential treatment center, Lampert tells Allure.

How to get help

Sofi began outpatient treatment after her friends, family, and teammates encouraged her to get help. With the support of a counselor, she worked her way up to eating and taking appropriate amounts of insulin. While she still struggles with body dysmorphia and disordered eating, insulin restriction is one behavior she hasn’t returned to. Olivia also received outpatient treatment at an eating disorder clinic, where she underwent cognitive behavioral therapy and met with a dietician, and hasn’t restricted insulin in 14 years.

Asha Brown’s breaking point came when she realized her eating disorder was destroying her acting career. Her stamina and strength were so compromised, she often missed performances, which cost her a contract with a performing company. “Theater and performing had been my safety net ever since I was a little girl,” she says. “To know I was ruining that — that really made me fall apart to the point where I was finally willing to ask for help.” She received inpatient treatment at the Melrose Center in St. Louis Park, Minnesota, which has a program for diabetics with eating disorders.

If you think you could have diabulimia, Lampert recommends talking to a doctor, therapist, or nutritionist with experience treating eating disorders. If you’re not sure where to start, you can reach out to an organization like We Are Diabetes or the Diabulimia Helpline. “Many people with eating disorder symptoms think they can ‘fix it’ themselves, but it’s important to get the right kind of care and support,” Lampert says.

If you are currently struggling, there is help available, and you are not alone. For treatment options, visit the National Eating Disorders Association (NEDA) or contact NEDA’s Live Helpline at (800) 931-2237. They’re available from Monday through Thursday, 9 am to 9 pm (EST), and on Friday, 9 am to 5 pm (EST). If you’re currently in a crisis, you can text NEDA to 741741 — this is available 24 hours a day/seven days a week.