Dr. Nesochi talks about the risk between hair dye and breast cancer on SheKnows. 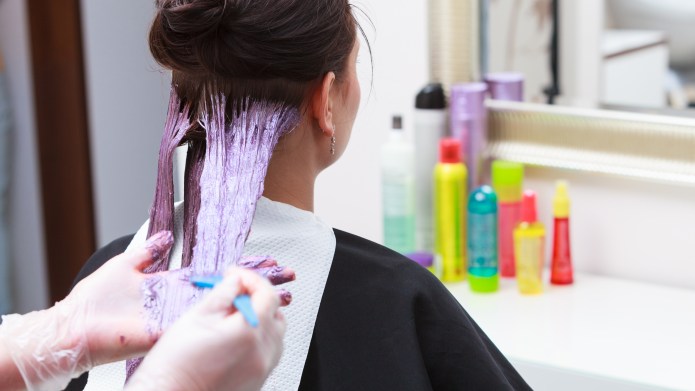 Given that an estimated 70 percent of American women color their hair, news of a recent study linking dyeing and chemically straightening hair to higher rates of breast cancer did not sit well. Naturally, this research has raised a lot of questions: Should we stop dyeing our hair? Are some products worse than others? Should we panic? SheKnows spoke with two experts to find out what we really need to know about these new findings.

Published Wednesday in the International Journal of Cancer, the study analyzed data from an ongoing research project called the Sister Study, which includes medical records and lifestyle surveys from 46,709 women ranging in age from 35 to 74. Part of the survey addressed whether or not participants dyed or chemically straightened their hair.

However, Black women who regularly used permanent dyes to color their hair were 60 percent more likely to develop breast cancer, compared to those who did not report using dyes at all. Women who reported using chemical straighteners had a 30 percent increased risk of developing breast cancer, regardless of race. But the study also notes that Black women were far more likely to use chemical straighteners.

This is a lot to take in. Do we really have to re-think our use of chemical-based hair products? Here’s what two doctors think.

The context of the research

Like any research, it’s important to consider the context of the study, as well as the methodology. First of all, we have to understand that this is an observational study, Dr. Janie Grumley, breast surgical oncologist and director of the Margie Petersen Breast Center at Providence Saint John’s Center and Associate Professor of Surgery at John Wayne Cancer Institute in Santa Monica, California tells SheKnows. This means that researchers looked at data from a huge number of women and looked for patterns or associations.

“One important thing to note is that an association found in any study does not equate to causation. Meaning that although there was an association found between the use of the chemical hair products and breast cancer, it does not mean that the products were the actual cause of breast cancer in these women,” Dr. Nesochi Okeke-Igbokwe, physician and health expert tells SheKnows. “Ultimately, a correlation was identified that must be further investigated.”

Even if the link between hair dyes and straighteners and breast cancer is a correlation, not causation, we still need to know what that means. According to Grumley, to put it into perspective with other potential cancer risks, the one posed by hair dyes and straighteners is relatively minimal compared with other risk factors like body weight, dietary habits and the amount of exercise we get.

Similarly, Okeke-Igbokwe says that it’s important for all women to understand that breast cancer can be caused by multiple risk factors. “So, women should discuss their individual risk with their doctor and identify strategies to minimize exposure to risk factors they can actually control, like their  diet, exercise, smoke exposure, etc,” she notes.

What to know about chemicals & your hair

It’s not really a question of whether or not you should stop dyeing your hair, Grumley says. Rather, it’s being aware that there are always going to be some risks when applying chemicals to our bodies and having all the information we need to make informed choices. For example, if you have a family history of breast cancer, you probably don’t want to do anything that might add to your risk, she explains. But at the same time, for the average person, the risk is not as significant, and Grumley says that the FDA won’t be pulling dyes off the shelves of stores because of the study.

“Before using any product, you must always consider the potential health danger that may be lurking with use. Here is the bottom line: There is so much more research required to really elucidate the long-term health problems associated with chemical product use,” Okeke-Igbokwe says. “To date, no one has really pinpointed the specific chemical constituents that may pose the greatest risk to one’s health. Nonetheless, women must really take heed about the frequency in which they are applying any chemical products to their hair.

Also, Grumley points out that the study specified that women who applied hair dye themselves at home had a slightly higher risk of developing breast cancer. She says that this may have to do with the application of the dye; as in, when people who are not trained professionals dye their own hair at home, they may leave it on longer than recommended, or may get too much on their skin.

The study found an increased risk of developing breast cancer among Black women who use hair dyes and chemical straighteners, but Okeke-Igbokwe explains that the researchers were not clear about the exact formulation of the dyes and straightening products that the women in the study used. In other words, it didn’t provide any specific information about why this happens.

“It may be possible that the formulation of the chemical dyes/relaxers used by Black women as compared to white women were quite different,” she says. “Perhaps, the substances used in the Black women’s hair products included a much higher concentration of dangerous chemicals.”

One of the main takeaways from the study is that more research on this topic needs to be done, Grumley says. This could include looking at the chemicals that are currently being used in hair dyes and chemical straighteners and trying to understand how they affect our health. “These large studies are great because it helps point researchers in a direction and say, ‘OK, there’s something going on, let’s tease out the details of this,’” she notes.

Lastly, Grumley wants people to know that they shouldn’t panic about the study’s findings. However, if they have any questions about hair products and their health, they should discuss them with their doctor. “That’s what we’re here for,” she says. “Talk to us about any anxiety about it and concerns, and hopefully we can help address them.”